Showing posts from 2013
Show All

November 12, 2013
Well, we've hit the big time. a 5 minute skit on RAM and life modelling on QI ! Also, another link - to links on elves' page to life modelling. Featuring Rachel McCarthy of the Register of Artists' Models ! Here is the link to the episode:   QI
Post a comment
Read more

October 23, 2013
Just thought you might be interested in this interview Stephanie did for Naked Soul Art about life modelling: http://www.nakedsoulart.com/blog/getting-naked/ Contains some upbeat thoughts on being a model and a shout-out plus link to RAM :)  Well done, Stephanie!
Post a comment
Read more

September 25, 2013
A new feature will be regularly publishing some of the many letters of thanks I get for RAM 's services. Dear Rachel,   May I commend you on the RAM website?   On Sunday I was offered and accepted a long-term booking (ten sessions), and yesterday was separately offered and accepted a  long-term booking (seven sessions to start, with long-term potential) at a girls’ school.  And I haven’t even been on the website for a week!   I’m extremely impressed.   Many thanks.   Stephanie Dear Rachel, I wish to thank you for being a great leader and moderator - your enthusiasm and commitment to improve standards are admirable.   All the best,   Vanna  Hey Rachel! How are you? We love RAM!!! Keep up the good work and thanks to make life models life easier. I'm a big fan!! ;) Luca Thanks Rachel. Just like to congratulate you on a really excellent and useful site. John Hi, Rachel We are very impressed with the standard of modeling and th
Post a comment
Read more

September 25, 2013
Susie Mason of   The Register of Artists' Models is doing really well since starting a new career via RAM ! Her latest report: My portrait called "The Ageing Dancer" has been chosen to be in the window, at the Alpha Gallery, 23 Cork Street, £7,500 just in time for Christmas shoppers as is behind Bond Street.  It is also featured in European newspapers and magazines and the artist Michele Del Campo will speak on Spanish TV.  I have told him about Modelreg being a great place to look for new models when he needs for a future project. Usually he chooses models by spotting them in the shopping centres, on the beach etc etc (!) but its always good to have a new contact.
Post a comment
Read more

August 03, 2013
Our Angela Plater did us proud in this interview. Angela's bit starts about 20 minutes in. Radio 4 Interview
Post a comment
Read more

RAM in Women's Own magazine! 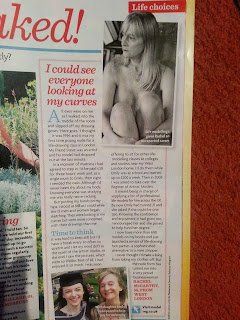 RAM in Race For Life

April 16, 2013
I'm participating in the  Race For Life  on May 13. The biggest breast cancer fund raiser. Here is my  sponsorship page  if you want to back me!
Post a comment
Read more

Philip Herbert and his wonderful career

April 13, 2013
A few years ago, Rachel did this mini documentary with CNN . Interesting insights into the world of a life model Interview with CNN
Post a comment
Read more

RAM models feature in The Sun!! 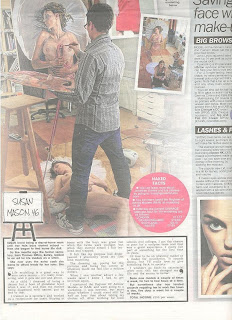 RAM Life Drawing Hen Parties given the thumbs up in Floodlight Magazine!!

Our Luther models on Heart FM this morning!

April 10, 2013
Well done, Luther Taylor. He modelled this morning on Heart FM for Jamie Theakston and Spice Girl , Emma Bunton . Here is the link to the Heart Blog for pictures and details! Link to Heart Facebook page about Luther and the life drawing.
Post a comment
Read more

April 04, 2013
Susie says "If you "google" " images for Yinka Shonibare, Pop, The Last Supper " you will see images come up from the POP exhibition in the West End, continuing this week.  There is a very pretty tableaux in bright colours and beautiful fruits/flowers...I am the dancey figure with the tiny hand outstretched to the central figure.....red/green colours...nice to see it at last!!" Well done Susie! Yinka Shonibare's website POP exhibition link
Post a comment
Read more

RAM models feature in This is Hampshire

April 04, 2013
RAM models, Brian, Amanda and Grace are modelling for this event. Strictly life Drawing ! Well done everyone - and enjoy the day. Artists - go to this lovely event!
Post a comment
Read more

March 19, 2013
RAM and Rachel McCarthy feature in this blog. In it, Patrick speaks of how he found RAM and how much he admires the work we do! RAM and Rachel
Post a comment
Read more

March 19, 2013
I feel I must mention the wonderful work RAM model Lucy Saunders and her colleague, Esther Bunting do via the marvellous organisation Spirited Bodies. The idea is that anyone can model - and these group events are truly joyous occasions. They also, very kindly, audition models for RAM membership. Here is a recent Daily Mail article about them.: Keep up the good work, ladies!
Post a comment
Read more

March 19, 2013
RAM model, Clifford Allison, sent us this description of his recent tv experience! My turn for a TV stint today - a life modelling session filmed for television. It lasted 2 hours (eventually!) with a half hour break in the middle for the 2 groups of artists to complete separate questionnaires. This was all a staged subterfuge on the 20 artists there, who believed they were attending a televised life modelling session. Well, they were, but that was not the point of the programme, which was a scientific exercise to observe what they ate during the break! I'm not sure how that part went but I was pleased with the session, especially the spontaneous applause the tutor and I got from the artists at the end. The programme is called ' Secret Eaters ' (sic) and, provided none of the guinea pigs object, it will air on Channel 4  on 16 May 2013.
Post a comment
Read more
More posts